My Panasonic DMR EX75 DVD recorder with the dodgy DVD drive was back on the blink this week. It started refusing to pick up the Freeview signal again.  It's been a year since I replaced the capacitor that's prone to overheating on these machines and, sure enough, on lifting the lid and inspecting the over-stressed replacement capactor, that's the problem again. 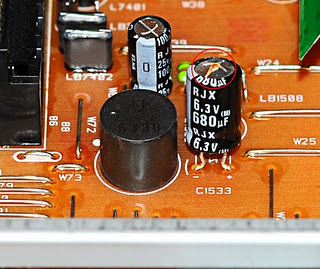 You need to remember if you're going to tackle this problem that when you take the metal cover off there is still some dismantling to do. This is the picture under the metal cover: 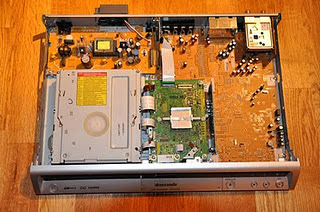 At this point you need to unplug the connector strips from both sides of the green PCB and remove the screws from the corners of that PCB and carefully unplug it.  There's a smaller green pcb towwards the front of the machine above the one you're removing and you'll need to loosen the two retaining screws on this as well before lifting out the bigger board.  You can then get at the dodgy capacitor.

Clip the old capacitor legs off as high as you can in order to leave plenty of purchase to crimp your new capacitor legs on.  This makes the subsequent soldering much easier.  If you cut the legs too close to the surface of the board soldering is extremely fiddly and it's very difficult to get a clean connection.

Except that in my case I wasn't.

On connecting the machine back to the TV and switching on, the DVD drawer comes out, the display starts flashing and eventually tells me I've got a U61 error.

This is the same DVD drive that the machine's DRM is preventing me from using. After a lot of communications with them last year, Panasonic eventually agreed to replace the faulty DVD drive free of charge via J.F. Associates.  Shortly thereafter the stressed capacitor failed and I replaced it.  At this point the Pansonic's DRM decided it didn't approve of my DVDs and wouldn't play any of them!

Ok I haven't been able to use the DVD drive anyway so I'll live with the U61 DVD drive error.  No can do says the machine.  Because as long as there is a U61 error it is going to keep whirring and flashing, sticking the DVD drawer in and out, switching the stations on the TV, sticking messages on the TV screen and generally making it impossible to watch the TV or use the hard drive on the Panasonic. Honestly it's like a scene out of a Morecombe and Wise sketch.

It's resort to the manual and online forums time.  On consulting the troubleshooting section in the manual it tells me this is not a fault (the forums beg to differ) and that I should just let the machine go through the motions of resetting itself; and then turn it on when it powers down.  I let the machine whirr and flash and guess what - the manual is wrong and the forums are right.  The problem persists and no amount of automated resetting is getting rid of the fault.

I tried a variety of fixes none of which worked.  Then I decided to try unplugging the connector strips connecting the DVD drive to the circuit board and connecting the machine to mains electricity with the DVD drive disconnected. The theory was that whatever software loop was causing the automatic reset to fail might be bypassed if I disconnected the drive, thus enabling a fix. There are four of these connectors:

It's probably best isolate them with insulating tape to avoid shorting, before replacing the machine cover and plugging into the mains. I gave it about 15 to 20 minutes to reset (I hoped though not with a great deal of optimism) before disconnecting it from the mains again.

The final stage was to plug the four DVD drive connector strips back into the green pcb, put the lid back on and try connecting it up to the TV and mains again.  This time it worked. The Panasonic can pick up the Freeview signal and record to and playback from the hard drive again.

Now dare I believe that, as a side effect of this tinkering, some sense might have been knocked into the machine's DRM, to the extent it might play my DVDs again? I know if I try it the system will have a heart attack and just give up but I can't help myself.

Why didn't I think of doing a disconnect reset this time last year! [Probably because at that point in the saga I had given up (unfairly as it turned out) on Panasonic ever helping and bought a cheap DVD player to play my discs.]

In any case the DMR EX75 is back in operation until the next time... I'm hoping at the very least that it survives the stress of the holiday season.

Note: pictures, as before, are from the AVForums thread that pointed me at the suspect capacitor this time last year.
Posted by Ray Corrigan at 10:26 AM

This blog is licensed under a Creative Commons Attribution 4.0 International License (CC BY 4.0).