In the wake of the Eastleigh by-election defeat the Tories "human rights are the root of all evil" brigade are on the march again. Home Secretary, Theresa May and Justice Secretary, Chris Grayling have been variously reported as threatening to withdraw from the European Convention on Human Rights and abolish the UK Human Rights Act.

With all the dangerous rhetoric blowing out of prominent rear ends on this subject which the usual mass media outfits are happy to promote, it's worth again returning to the actual statistics published by the European Court of Human Rights in particular, in the very accessible report, European Court of Human Rights Statistics on judgments by State: Statistics 1959 - 2010. It even has pictures: 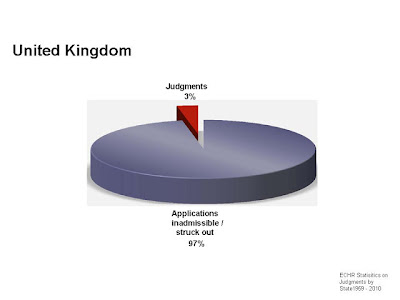 When politicians in significant positions of influence wield anti human rights rhetoric in the way that Ms May and Mr Grayling do, they are playing a dangerous game. Leading QC, Ben Emmerson, hits the nail on the head in his thoughts for the Independent today:


“The increasingly shrill rhetoric from Theresa May is beginning to sound decidedly unhinged. There is not the slightest prospect of the UK pulling out of the European Convention before the next election.”

Mr Emmerson urged the Prime Minister not to let UKIP and “little Englanders” dictate policy: “May and Grayling, and the people who are supporting them, are the barmy brigade of the Conservative Party. They are undermining the Foreign Secretary’s attempts to portray the UK as pursuing an ethical foreign policy and they are undermining the Prime Minister’s standing with the international community.”

Update: Lord Neuberger, President of the UK Supreme Court, reportedly agrees, though in a decidedly understated fashion. The learned judge is also less than enamoured with the government's secret courts and cutting of legal aid, in addition to being concerned about a possible subconcious bias contributing to the gender imbalance in the judiciary. The Guardian's editorial one day on is interpreting Lord Neuberberger's intervention on human rights as a shot across the bows of the little englander Tories branch of government.
Posted by Ray Corrigan at 4:14 PM No comments: