Aircraft windscreens, 3 phase supplies and the power of algebra

Many moons ago I worked on development type testing of aircraft. It meant I got to break bits of airplanes for a living, by building specially tailored flight simulation rigs and testing the parts to destruction. Fun.

One of the components I did a lot of testing on were both military and commercial airliner windscreens and canopies. Before they are allowed anywhere near a flying machine, prototype designs are subject to bird strike, hailstone impact, pressure, lightning strike, thermal shock, chemical resistance and a significant range of other tests to ensure they can comfortably manage operational demands. Typically they will have an operating safety factor of x4. Which means even with the stronger of the two main structural laminates of a windscreen damaged to the point of being completely unable to take any load, the window could still withstand four times standard flight operating pressure.

These things are intentionally vastly over-designed for safety reasons and the testing continues on components passed for flight, to ensure stock rolling off the production line continues to be manufactured to designed and approved standards. Given the broken insecure infrastructure of the internet, the information systems industry has a lot to learn from their counterpart engineers in aerospace.

The average airline passenger would be surprised at both how crude and how complex aircraft windscreens are. They form critical parts of the structure of the plane for a start. Typically they will be laminated, non isotropic, structurally reinforced, electrically heated components, subject to a vast range of three dimensional thermal, structural and corrosive dynamic and shock stress conditions. And they provide an endless stream of challenging, interesting technical problems.

Typically a 3 phase delta connected gold or other metalic thin film is embedded in the window for de-icing purposes. Now being a bit of a techie and fan of maths I occasionally get asked what's the point of algebra, usually off the back of complaints about it being too difficult or useless. Well I do some maths modelling at the Open University summer school structures lab and students click with that because it's done in the context of understanding bridge structures.

The algebra below, though, also had practical application. We had an electrical failure on a windscreen and a critical need to know the actual resistance level of the individual phases of the gold film. Every engineer going through university gets taught the formula for calculating parallel resistances. Unfortunately, we needed to know the resistances of the internal phases of the gold film not the the ones we could read on the meter from the electrical contact points on the exterior of the windscreen. The result was some algebraic manipulation, outlined below, which doesn't appear in the average engineering course to produce the final equations we needed to understand what was going on inside the screen and how far we might push it.

It took a little bit of care and the odd non intuitive jump but it got us out of a hole with the faulty windscreen. I had forgotten the case but came across it again in clearing out my office to move out of Foxcombe Hall which the Open University are sadly closing and have sold to Peking University HSBC Business School. 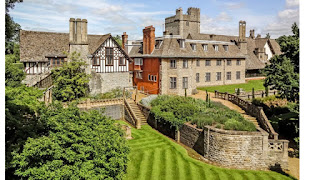 With luck an engineer or two, stuck on a parallel problem to my compromised windscreen, might trip over this post and save time trying to work out the necessary equations (it took a while) and get to the practical numbers they need to fix their prevailing issue.

Update: The algebra above involved a lot of playing about with letters at the time. The key is getting to equation 10 which is obvious when you see it but the steps to get there, particularly 4,5 and 6 were not initially intuitive to me - I couldn't, at the outset, see where I was going. A friend of mine, Tony Nixon, has developed a terrific game for teaching algebra, using tiddlywinks counters. He teaches people to move the counters around without them realising the rules they are using are those of algebra. The approach is to give people the confidence to mess around with the counters - without the panic induced at the sight of an x or a y (often a result of poor teaching) - whilst knowing that as long as the student follows the rules, each step is legitimate. The trick is then to facilitate the visualisation of the key stages, thereby aiding the process of determining which moves the student is best advised to use to progress towards their solution. In the case of the three phase windscreen problem above, the latter stages probably look more complicated to a student, since they involve keeping track of more letters. Yet all the heavy conceptual lifting is done by the time we reach equations 10 and 11 i.e. the difficult stuff was in determining which moves to make to arrive at a point where the answer essentially falls out.
Posted by Ray Corrigan at 6:08 PM No comments: