Are illegal downloads killing the music industry or is it games?

Charles Arthur at the Guardian is wondering if illegal downloading is killing the music industry or are consumers spending their disposable income on some other forms of entertainment instead? 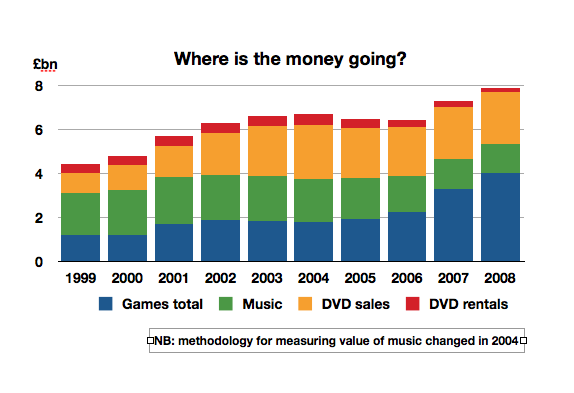 The music industry does like to insist that filesharing - aka illegal downloading - is killing the industry: that every one of the millions of music files downloaded each day counts as a "lost" sale, which if only it could somehow have been prevented would put stunning amounts of money into impoverished artists' hands. And, of course, music industry bosses' wallets...

...I think they're spending the money on something else.

What else, I mused, might they be buying? Hmm... young.. like the entertainment industry... ah, how about computer games and DVDs? "

See also Illegal downloads and dodgy figures by Ben Goldacre in last Saturday's Guardian for some further analysis of the piracy by downloading figures.
Posted by Ray Corrigan at 4:13 PM

This blog is licensed under a Creative Commons Attribution 4.0 International License (CC BY 4.0).